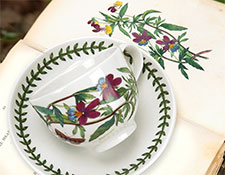 For 40 years, Botanic Garden has been a serene and comforting presence amidst the increasing busyness of our everyday lives. As the world races around us, the most recognised collection in British ceramics is still holding the fort at the centre of home and family life - a secret garden in which to enjoy the good times.

Botanic Garden makes everyday occasions special – like an enjoyable Sunday breakfast with the family, or afternoon tea and a catch-up with friends. And this famous collection isn't just tableware: take a bit of the garden into the greenhouse on a beautiful watering can, or add a floral twist to baking with an elegant apron.

Each and every piece is still made with care, attention and love, passing through 22 pairs of hands before being ready for a home. 40 years of improving and perfecting has made Botanic Garden a wonderful collection, designed to put the enjoyment back into our busy modern day lifestyles.

…the deep, pure white of the delicate pottery, the flowery motifs synonymous with British ceramic design, the unexpected butterflies interspersed amongst the flowers…

The concept is timeless, yet as fashions have changed, new flowers have been introduced to replace older motifs, and the collection has followed us into the modern era. But every piece, new and old, continues to tell the magical Botanic Garden story. 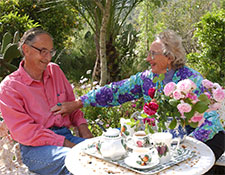 In the early 1970s Susan and Euan visited an antiquarian bookseller in London called Weldon and Wesley. Susan had been looking for 18th century engravings of sea creatures to use to decorate her pottery, but as she was searching for these engravings, the bookseller showed her a book published in 1817 called The Universal Herbal by Thomas Green.

This book was full of bright and detailed botanical illustrations and the vivid African Daisy instantly caught Susan's eye. As she flicked through the book, Susan's inherent design talent kicked in and she began to imagine a beautiful range of casual tableware that featured different flowers on each piece.

Susan remembered how she adored her grandmother's porcelain coffee set where each piece was a different colour and recalled a recent conversation she'd had with a supplier of transfer prints who had commented that he could now manufacture high quality and detailed prints.

She bought the book for 50 guineas and spent the journey back to Portmeirion envisaging this new design. By the time she returned to Bank House, her home next door to the factory at Portmeirion, she had decided that this collection would be manufactured on a variation of Meridian shape – a shape she had only recently designed.

Susan began searching for more botanical motifs that could be used in her radical tableware range. Again, she stumbled across another book, The Moral of Flowers. It was inscribed 'To Julia' - a gift from her brother on 24th February 1835. The author, Mrs Hey, had put together poems and prose for 48 different plants from oak trees to daisies. Crucially, she had obtained the help of a highly regarded draughtsman and former employee of the prestigious Horticultural Society, Mr William Clarke, to illustrate those plants. 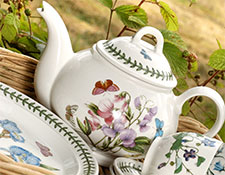 Clarke's illustrations were perfect for what Susan had in mind and she later purchased more books that featured his illustrations: Morris's Flora Conspicua and 3 volumes of Medical Botany by Stephenson and Churchill.

Susan decided to add butterflies and other insects to the designs to improve the fit of the motifs on the tableware shapes, and to add a little more variety. Then, to bring the range together, Susan developed the triple-leaf border.

Susan named the range Botanic Garden after an 18th century poem, The Botanic Garden, written by Erasmus Darwin – another Staffordshire legend. Erasmus was an acclaimed poet, inventor, dedicated botanist and grandfather of Charles Darwin. The name was perfect. Not only did it show that, when laid on a table, the ware would give the impression of a garden setting, it also allowed Susan to introduce more motifs.

Botanic Garden was launched in 1972 and since then has become loved worldwide and recognised by many as synonymous with great British design – a classic that, with new shapes and motifs, has remained as fresh and exciting today as it was in 1972.

In Botanic Garden’s first year, 32 motifs were introduced and in its lifetime over 70 motifs have adorned a variety of tableware, cookware and gifts.

Get the latest exclusive offers, a first look at new products and the latest design trends

receive 15% off your
first purchase
GREAT, YOU’RE
ALL SIGNED UP

Your coupon is on the way.
Be sure to check your email.

Thanks for visiting Portmeirion Group

You are about to leave Portmeirion.com to shop with . This will start a new shopping cart. But don’t worry, we’ll save your Portmeirion, Spode, Pimpernel and Wax Lyrical items for when you return.

We noticed you’re visiting from Canada

Shop with our authorized retail partner for delivery to your area